View of the Ailakka bay during the Continuation War (SA-kuva).

Kilpisjärvi has played a significant role in Finland’s military history. During the First World War, the Russian Empire transported its war supplies by horse and reindeer from the Arctic Ocean to Tornio via Kilpisjärvi, and used the village as a rest stop and storage location.

In June 1916 a group of Finnish Jäger soldiers detonated a Russian weapon store. A memorial plaque commemorating this event can be found on the roadside close to the Saana fell.

Retreating from Kilpisjärvi to Norway, the German soldiers took the Kilpisjärvi hiking lodge cabin with them to serve as an officer canteen. It was brought back to Kilpisjärvi after the war. This same cabin is now situated next to the current Hiking Center.

Ahdaskuru Memorial Bridge, the only remaining stone-arch bridge in Finland after the destruction of the war, is located on the highway between the customs office and the state border. It was finished in 1943 to withstand the weight of German war traffic.

At Muotkatakkavaara, which is the highest point on Finland’s road network and serves as the gateway to Kilpisjärvi, there is a memorial statue commemorating the Lapland War, as well as the last artillery rounds of the Second World War that were fired in Finland.

A memorial plaque, marking the place where the Kilpisjärvi Hiking Center meets Highway 21, known as the ‘Four Winds Road’, commemorates the following: ‘Infantry Regiment 1 fought the last battle on Finnish soil of the Second World War in this border area on 27.4.1945’.

Those interested in military history should also visit Järämä, the Lapland War memorial grounds, while they are visiting Kilpisjärvi. It is located 20km (12 miles) north of Karesuvanto on the road leading towards Kilpisjärvi. Järämä formed part of Germany’s wartime defence front, the so-called Sturmbock Stellung.

There are also a number of areas of historic military interest in Norway. It is possible to take a day trip from Kilpisjärvi to Bollmansveien, a road in Falsnes near Skibotn, built in autumn 1944 by Russian, Yugoslavian and Polish prisoners of war, which nowadays is a popular hiking destination. 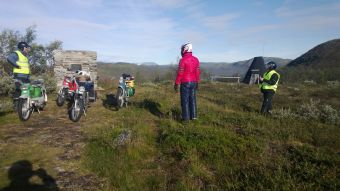